The Carnevale Romano comes to a close

The Roman city coffers were empty this year so the elaborate celebrations we were fortunate enough to see two years ago did not take place. Here is a re-post of the 2012 festivities. For this year's photos and description, please see the blog on www.thekirkoscaravan.com!

Posted by Between Remus and Rome at 1:05 AM No comments:

The many Valentines of Rome

To celebrate St. Valentine's Day, apparently now the official "World Day of Lovers" according to Italian calendars, Pope Francis conversed with and blessed 20,000 engaged couples in St. Peter's Square. Here is an article from Aleteia on the subjects covered.

To add to my 2012 post on legends of St. Valentine, here are a few new ones I discovered with the children on the three St.Valentines of Rome- one a priest, one a bishop, and one a physician.

Here, also, is a post on today's feast from my other blog on www.thekirkoscaravan.com.

Posted by Between Remus and Rome at 2:27 PM No comments: 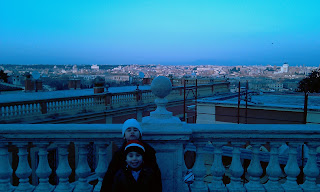 On February 14th this year I took in a panoramic view of Rome at dusk on the Janiculum hill with my two little Valentines and reflected how this "Day of Love" celebrated around the world is yet another example of how the roots of so many now-global traditions can be traced back to Roman cults, cults both pagan and Christian.

On February 14th the Church celebrates the life of one of the several saints named Valentine.
Here is an interesting history of the different Valentines.

The Roman Valentine celebrated on February 14th was a priest and herbalist or doctor. My introduction to his story began with a children's book by Robert Sabuda,, colorfully illustrated with paper mosaics to imitate early Christian art in Rome.

The most we know about this Valentine is that he was executed on February 14 for ministering to Christians under the reign of Claudius II (the Goth). The legend is that he was a very charismatic individual who succeeded in converting many of his jailers but whose luck finally ran out when he attempted to convert the emperor himself. He was beheaded at the Porta Flaminia and buried on the via Flaminia. The saint's relics can be found in Santa Prassede and Santa Maria in Cosmedin (one of my favorites, a Melkite church) in Rome, and elsewhere around the world.

A great cult must have grown around his memory, for he became the patron saint of many seemingly unrelated things, such as love and marriage, beekeeping (because love is sweet like honey?), epilepsy, travelers, and the plague. Hmm.

The connection between Valentine's name and love letters stems from the legend that is the basis of Sabuda's story-- the healing of the blind daughter of one of his jailers. Before being led off to his execution, he wrote her a note with his signature, "From your Valentine", which she was miraculously able to see for the first time.

But the official day for writing notes that express love is February 15, the ancient Roman feast of Lupercalia, in which maidens would write love notes for suitors to draw at random from an urn. As with the Feast of St. Nicholas on December 6 and the association of "Santa Claus" with Christmas, St. Valentine has been associated with love letters by the mere proximity of his feast day with a popular tradition of ancient Rome, though the author of this Wikipedia entry claims Chaucer made the whole love connection up, which complicates the issue even more but makes for fascinating reading.

Lupercalia coincided with or perhaps replaced the February 15 ritual in honor of the goddess of Spring-cleaning, Februata Juno, the origin of the month of February. The rite of the god Lupercus (from the Latin for wolf, lupus, but more commonly known by his Greek name Pan) took place in the "lupercal", the cave of the wolf-mother of the twin brothers she suckled, Remus and Romulus.

For other Roman name origins, look back at the cold month now blessed behind us-- January is named after the two-headed god that bids farewell to the old year and looks ahead to the new, Janus. The hill upon which we now reside, the Janiculum, is also named after Janus, as explained in a previous post. Additionally, the month of May is named after the goddess Maia, the harbinger of Spring, the etymological origin of the name of my daughter Maya, born on May 1 (which also means Mary, who is the "Queen of May"), and so on and so forth. There is seemingly no end to Rome's influence on the world!
Posted by Between Remus and Rome at 10:10 AM No comments:

The Return of the Remus and Rome Ramblings!

Yes, dear friends, the blog is back! Until I retrieve my remusandrome.com domain name from google, you can find my ramblings on life between Remus and Rome right here at romeandremus.blogspot.it.

Since the last post a great deal has transpired- our family left the goats, bees, and green pastures of Assaf Acres and returned to a busy life in Rome; the bambini continue to adjust to full immersion Italian at school; mamma has been transformed into a beast of burden with the daily baby and backpack carrying to and from school;  papa multitasks round the clock while still finding time to whip up gourmet dinners; Rome continues to both inspire and sadden us.

Life and Death in Rome and Remus

Despite the ordinary routine of work and school, life set against the dramatic backdrop of the Eternal City offers a pageant of human drama on a daily basis. Take today, for example: we returned from school in the dark and under the drizzle of a January late afternoon with a stroller laden down with trinkets from the "Chinese shop", variety stores on nearly every block in Rome that are the only affordable places to find housewares such as doormats and alarm clocks. As we passed in front of the school gate we saw a man, probably Peruvian, crumpled and crying. A man and woman stood beside him with what appeared to be identification papers, presumably to identify and aid him. I thought I caught the smell of alcohol wafting from him as we passed. It was a heartbreaking sight under the rain. The children of course wanted to know why he was there and to satisfy their questions we created a possible back story for him to explain his despondent expression.

An hour or so later papa returned home with a wet coat and a pale face. He, too, had encountered a tragedy on the trail back home at the same time. As he and a colleague were exiting the office a motorino sped past at a high speed on the wet street, running directly into the side of an elderly woman crossing the street. At first they saw only the man and attended to him but then noticed a small shape in road of a coat. Tony held his umbrella over the woman as she slowly regained consciousness and the ambulance arrived for both. Incredibly, both driver and pedestrian survived but undoubtedly with a shattered hip and other injuries.

Unfortunately today's episodes were not unique during our time living in Rome. Shortly after I first began writing from Rome in 2002 I heard the sickening crash of a motorino against a barricade across from the eighth century Vatican City walls. This driver too had been taking a corner at a high speed and was dead before my roommate and I brought the priest next door to administer last rites. A few months later Tony was again the first on the scene at a traffic accident near the Vatican involving a motorino and a bus, playing the role of guardian angel as a first responder to the driver. Last week, Maya and her classmates apparently saved the life of a young motorist through the intercession of their prayers. The brother of one of the nuns at her school was struck by a drunk driver and proclaimed dead at the hospital. When his sister shook his arm and spoke to him, however, he regained consciousness, telling her that he had had a vision of twenty-eight child angels telling him to return to life.

Needless to say, we have sworn off transportation via motorino for ourselves and certainly for our children (believe it or not, I have seen my children's classmates transported to school on the back of their parent's motorino, which is, apart from the danger, a very common and practical way for Romans to get to work in the morning and find a parking space in this congested city). 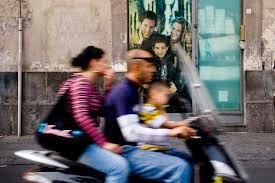 But Rome is not all danger, death, and drizzle this January. The sun peeks through the gray clouds every now and then, the grass is still green, and we are having an extremely mild winter compared to what we would be suffering through if we were back on the farm in Remus. When the rain lets up we can put on our rubber boots and explore the two glorious parks next door- the landscaped Villa Sciara full of statuary and the immense Villa Pamphili with its towering umbrella pine trees.

While I still plan to occasionally post on Remus and Rome related themes on this blog, I'll be posting more prolifically on my new blog on the website of our new adventure, thekirkoscaravan.com. You are cordially invited to follow this blog if you are interested in its running themes of family traditions, homesteading and nature study, storytelling and theater, and the four cycles of life that the Kirkos Caravan studies--liturgical, sanctoral, the natural seasons, and the human life cycle.

Posted by Between Remus and Rome at 5:44 PM No comments: